Ten - what does that mean to you?  Ten items?  Ten colors?  Now think of ten years.  Do you think of the past, of now, of the changes, of each year by itself?  This year marks ten years of DCMQG.  In 2010 Natalie Hardin gathered a group of people that liked modern quilting. They met at Ebenezer's Coffee Shop, near Union Station and the seeds of DCMQG were planted.  Over the past ten years we have grown from a handful of people to over one hundred members, and soon became officially part of the Modern Quilt Guild.  Many friendships have been forged and we have supported each other in our individual paths of life and growth.

To celebrate our ten year anniversary, we have a show.  Members were asked to create a mini-quilt around the theme of ten.  The theme was interpreted in so many ways and the range exemplifies the range of our members.  Please hop on over to dcmqg10.com and enjoy the show! 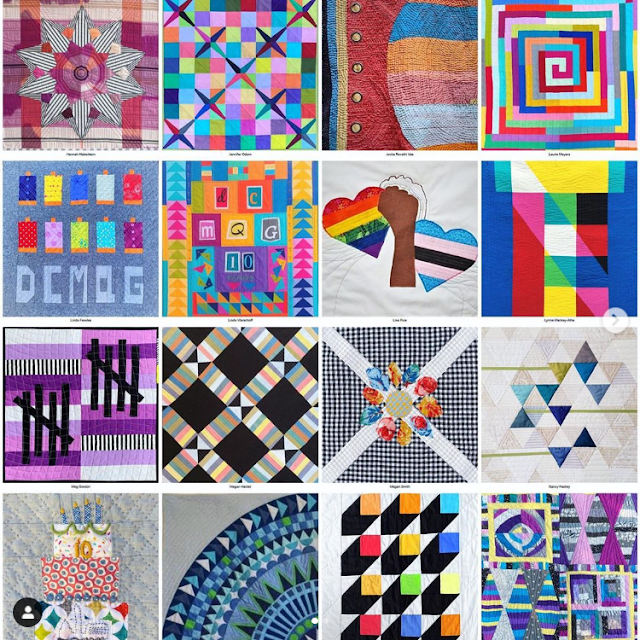 Confronting Racism as Quilters: Getting Started

"What will you do?" This past weekend our guild had the privilege of listening to and seeing Chawne Kimber deliver her lecture, "Quilt Autobiography," on Zoom. If you're not familiar with Chawne and her work , she's an African American quiltmaker (and math professor by day) whose work frequently addresses racism and misogyny. Her work is relevant all the time, but it had particular relevance on Saturday, six days after the murder of George Floyd while in police custody and a few days into the protests that ensued. The words pieced together in Chawne's quilts, such as "Uppity Negro," "I am still not free," and "I can't breathe" (the dying words of Eric Garner, and also George Floyd), took on extra significance on Saturday, even if we could only see them on a screen. Without their messages, these quilts are still beautifully intricate works of art; with Chawne's addition of words, each quilt becomes a tour de force. I

May Meeting Recap and Show & Tell

We're slowly getting the hang of Zoom meetings and, once again, it was really nice to see so many familiar faces and meet a few new members as well. (Welcome, Gretchen C. and Bonnie M-G!) We went through a few business items first, namely the following: -Dues for 2020-21 have been lowered to $35 for individual members (from $50) since our costs for the year are lower without needing meeting space and since times are tough. -Chawne Kimber will be delivering a lecture to our group via Zoom on Saturday, May 30, at 4:00pm. We are very excited, and we'll soon send out details! -We are still holding small group Sew Ins every Thursday night at 8:00pm and Saturday morning at 10:00am. It's a treat to catch up with just a few sewing friends at a time, so please join! -We are still having our 10th Anniversary Show, Ten , in a virtual gallery, so please submit those quilts by June 30th! More information on all of the items listed above can be found in Your Thursday Stitch (we are keepi

We hope you will find this information useful as the COVID-19 crisis continues. Please note this post is dated April 30, 2020. We will update as often as we can, but safety and health recommendations have been constantly changing throughout this pandemic, so we cannot guarantee that all of the information below is correct. If you have a question or notice that anything in particular seems out of date or incorrect, please contact us at dcmodquilts AT gmail DOT com. Some patterns our members have used: MADE Everyday comes recommended as an easy pleated pattern in several different sizes; we've linked to the one with knit fabric ties. Sweet Red Poppy has a fitted pattern similar to Craft Passion's. You can also find a pleated pattern on her site. Deaconess is a health network with its own mask pattern and has options for both elastic and fabric ties. Johns Hopkins approved mask -- some sewists found this one tedious, but this is the only pattern that Hopkins will ac