Posted by Anna Hall on June 20, 2013
This past weekend was the first ever DC Modern Quilt Guild Retreat. Some members were able to come for a few hours and others were able to come for the entire three days - but I think we can all agree that we had a blast!! It is always so much fun to catch up with friends, stitch together, and talk about quilts. 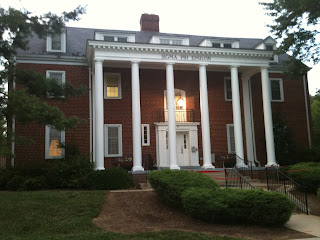 The retreat was hosted on the University of Maryland's campus - in a fraternity house. Definitely not the kind of all-night party one would stereotypically think of in a frat house, but the location worked well. Retreat go-ers took turns preparing meals in the large industrial kitchen. This was a great way to get to know members of the guild and keep costs down. 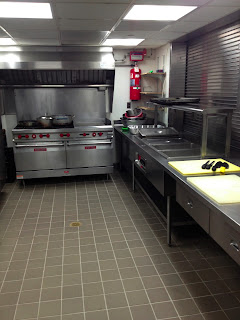 A group of people worked on Noodlehead's Super Tote on Saturday as part of a sew-along. I can't believe I don't have a photo of the finished projects (but hopefully there can be another post on projects later).

There was a "secret sewer" activity throughout the weekend where retreaters would leave gifts for their secret partner. It was so much fun to see what gifts people were given!! Handmade presents truly are the best! (...well, maybe right after fabric) 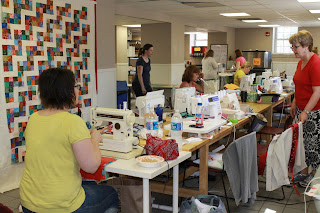 We lucked out and had great weather all weekend! Some people went on walks or runs on local trails and streets. Others enjoyed the beauty by sitting on the porch and flipping through quilting books and magazines. We were even able to eat all of our meals at picnic tables behind the house! 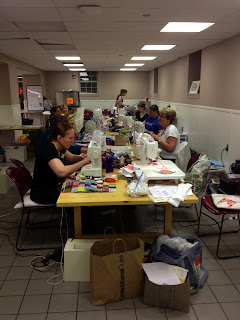 A huge THANK YOU to everyone who was able to come to the retreat and provide so much positive energy! I had a great time and I hope that you did as well! 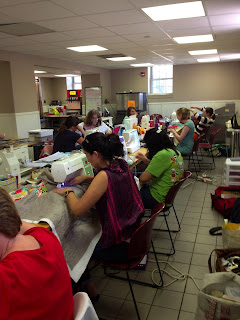 Did you have to miss this retreat? Don't worry! I will start thinking up ideas for an upcoming retreat. Please let the leadership team know if you have any ideas and suggestions for locations or activities for upcoming retreats. I think this was such an enjoyable weekend that we must continue to do these getaways in the future!

Several of our members are keeping busy with our Diabolical Jane Quiltalong , organized by Phyliss Jaffe. Diabolical Jane is a quilt pattern based on a 200 year-old quilt our members spotted at the DAR Museum several years ago. Jessie Aller then created a tutorial , with a warning -- the piecing is simple, but the fabric choices are diabolical! -- and named it for Jane Chick, who is certainly not diabolical! Anjeanette Klinder later designed a mini version, the Sweet Baby Jane , and drew up a handy coloring page . This quilt has quite a bit of lore, and I'm probably not getting all the details right, but as you can see it's a really beautiful and unique design. (The above photo is Jessie Aller's version, which closely resembles the DAR original; you can see both versions on her tutorial. ) This is an informal quiltalong you can do at your own pace. We have two Instagram groups dedicated to all things Jane! Message Phyliss Jaffe if you'd like to join in the diabolica

Confronting Racism as Quilters: Getting Started

"What will you do?" This past weekend our guild had the privilege of listening to and seeing Chawne Kimber deliver her lecture, "Quilt Autobiography," on Zoom. If you're not familiar with Chawne and her work , she's an African American quiltmaker (and math professor by day) whose work frequently addresses racism and misogyny. Her work is relevant all the time, but it had particular relevance on Saturday, six days after the murder of George Floyd while in police custody and a few days into the protests that ensued. The words pieced together in Chawne's quilts, such as "Uppity Negro," "I am still not free," and "I can't breathe" (the dying words of Eric Garner, and also George Floyd), took on extra significance on Saturday, even if we could only see them on a screen. Without their messages, these quilts are still beautifully intricate works of art; with Chawne's addition of words, each quilt becomes a tour de force. I

We had a wonderful meeting in August.  Lots of beautiful quilts were shared and many donated.  It was fun to see how people would label quilts.  Some always labeled in a corner, others threw it on the back where it would best fit into the quilting.  The labels made for some fun backs!  Thanks to everyone who came out!  Click the link to see all the photos from Show and Tell.   Show and Tell Photos